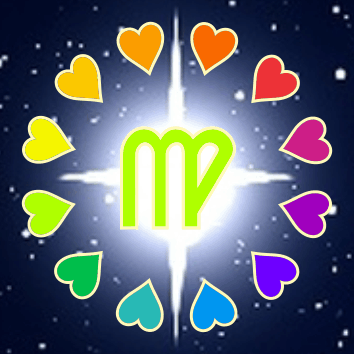 This page has three sections about love and the zodiac sign:

Virgo’s detail orientation grants innate problem-solving abilities. Praise Virgo folk for how well they figure things out and when they are genuinely helpful in determining solutions for practical problems.

Note: dates are approximate and vary slightly by a day or so from year to year.

Virgo is the sign most misunderstood because of our patriarchal ideas about what being a “virgin” means. A closer translation would be maiden and the idea is gainfully understood as any woman not bound to a man by engagement or matrimony. Even in Classical Greece, virgin goddesses such as Athena and Diana wielded considerable power, albeit Athena more in service of the will of the king of the gods, Zeus.

In ancient times, virgins were also the temple maidens who slept with strangers in the name of the goddess and whose off-spring would be considered divinely sired. The patriarchal need to define just who has and who does not have divine blood had to put an end to that practice so what were viewed as merely temple prostitutes had to become non-sexual vestal “virgins.”

Eventually a single such virgin with a divine child on her knee became the only allowed example in the Western World for hundreds of years. We are living in the aftermath of those days.
All of this is to say is that Virgo’s connection to notions of purity and sexuality are complex. Ritual purification before and after is usually a must! Relationships must be mutually beneficial and an inventive time can be had by all for Virgo’s combination of earth and mind inclines the development of continuously improving technique. It’s always analysis and process for practical ends for Virgos. Figuring things out and how they can be fruitfully combined is where the sign excels. They just have to remember that often they’re more into the process of getting there than the end results. On to the next task on the to-do list!

Their planetary star Mercury inclines them to be wily and know how to work the angles. But they also want to help and be a guide. The most evolved Virgos are busiest of all: humbly serving to heal the world.

To learn more about Virgos as individuals, check out their profile.

Go to the main Love page.