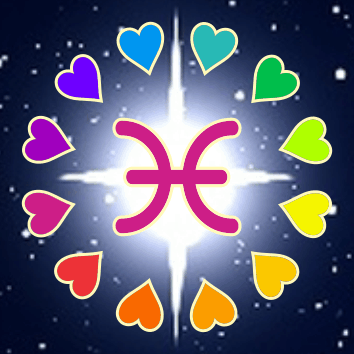 This page has three sections about love and the zodiac sign:

Pisces’ beliefs about their art, dreams, and/or causes are deeply felt. Praise Pisces folk when they rescue the worthwhile from being lost and capture enchantment in their creative or spiritual endeavors.

Note: dates are approximate and vary slightly by a day or so from year to year.

Pisces is typically thought of more interested in attracting a mate than pursuing one, but once captured, their reputation is that they make empathetic and imaginative partners. But remember, as Pisces the last sign of the zodiac, in a sense, Pisces can access traits of the others, putting them in close competition with Gemini for the most unpredictable sign. So be careful with those born under the sign of the two fish tied together because despite the sign’s reputed sweetness, a Piscean may morph into a shark (as well as many many other denizens from the deep!)

Their planetary star Jupiter inclines them to a certain theatricality. Often their’s is a voyeur’s perspective from which they are watching themselves doing what they are doing even as they are doing it! With their natural compassion for those less fortunate, some do not appear to be as judgmental as their also-ruled-by-Jupiter Sagittarian siblings, but most assuredly, all Pisceans have an opinion on the rightness and wrongness of just about everything around them.

Pisces lives one life here on earth, yet has at least one toe in some creative or spiritual realm. What this means, is that by nature, they are elusive creatures who must be allowed to escape when they need their alone time, whatever it involves. They’ll somehow know when you really need them and mysteriously re-appear when required. If you’re fortunate enough to win the love of a Piscean, be grateful to this magical being who is capable of sacrificing so much for your welfare.

To learn more about Pisceans as individuals, check out their profile.

Go to the Love main page.