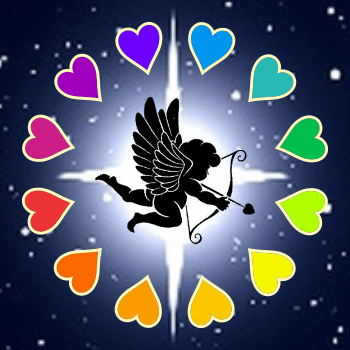 “Love” is an overloaded English word.

The Ancient Greeks had five words for it. Love for:

#2 gets all the big press to the expense of the others. And sex just for sex isn’t even considered love anymore, even though the old expression for sex was “making love.”

I believe that the deepest truth about love is that it is not a feeling. It’s really a choice.

It one thing to be loving towards another when you’re “in love” with them, which if we are honest with ourselves, is infatuation. This is not to diminish its significance!

When the fabled cupid’s arrow pierces your heart and you’re in love, you see the potential of a coupling all at once and the world becomes a rosy paradise… if it works out!. If not, it’s frequently a tortured yearning and pining aching of the heart.

This kind of love can transform lives (and manifest as gentle words, deeds and fine art) if handled properly. In that state, what you see in the person has more to say about you often then it does about them, particularly in cases of unrequited romantic feelings.

For long-term connections, it is another thing to endure the travails of a sustainable partnership, especially through those moments when you’re “in hate,” which is inevitable at times in any lasting relationship with another human being. Why are these disagreeable moments inevitable? Because over the long term, you’re going to see more of your partner’s disagreeable parts too. Those are precisely the moments where the rubber hits the road when it comes to love because you could choose to love them despite their foibles or not.

No one is perfect, but it is also true that you shouldn’t have to just put up with every bad behavior either. One has to choose whether one will love someone despite their flaws. Everyone has some and the degree to which people can change is smaller than some would prefer!

Understanding how Astrology views the relationship between any two signs can be helpful. Astrology does not show love; it shows compatibility – how the signs tend to get along based largely on their similarity or dissimilarity to each other. As the information in this section is based on purely a comparison of the Sun placed in the Tropical Zodiac Signs, they cannot be anything other than generalities and YMMV. But in those cases when a partner’s behavior seems so different than your own, they can be also illuminating. At least it’s another perspective!

To view the compatibility between a sign and others according to modern Western astrological theory1, select from below. As always, the information is for fun and entertainment purposes only. 😉

Take these with a grain of salt. Any sign can truly work with another if the participants choose true love.

1. It’s theory because it assumes everything else is equal, which when practicing personal astrology it most certainly never is. All the stars and planets were present at your birth and had something to say about you and the full pattern is unique. A complete comparison between the personal horoscopes for both participants is required to see the full picture of the dynamics between them. This would take into account many additional considerations that can result in differences from what the general theory would indicate.?